How the media assaults what they call "assault rifles". 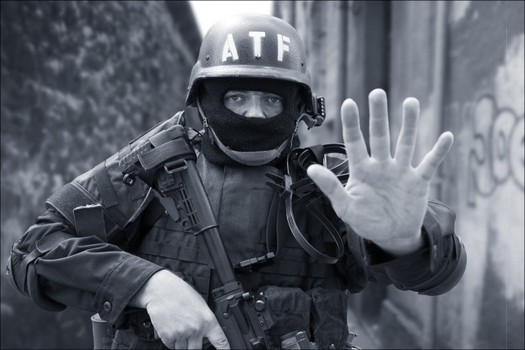 Click here for new parts to not have to assault weapon register a rifle in California 2018.

California is known as one of the most unfriendly states to most all firearms. In California we have the Handgun Safety Roster, an assault weapons registration from the mid 90's, magazine capacity limitations, binary trigger, slide fire stock penal codes and much much more. One of the good things is that we have people behind enemy lines that are constantly using the tools for $10.00 and capabilities to assist fellow Californians to not have to give up what is left of there right to own many which California consider to be an assault weapon.

In 2014 I began designing new products that could assist those who did not like the current magazine locks. I also had a pretty good amount of info that the current elected officials in Sacramento would be making a push for the current components to be outlawed so they could make multiple attempts to get rid of Black rifles in California all together. Good luck! Right! Not on my watch!

The first design I came out with is the bolt catch magazine lock which I released to the website first of this year. I then also released the SB880 magazine lock which was from left over bullet buttons I had from the previous year. I just modified them and sold them at a good price. Once the SB880 locks were gone they were discontinued and the bolt catch magazine lock is now one of the top sellers for many states that have ridiculous laws governing a tool that does not control itself. 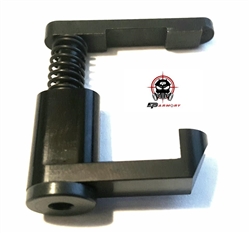 As a Californian I have had to make sure that what I currently have in my personal collection is "by the book" legal. Especially since I seem to have had a federal target on my back since 2012 when I released the EP80 to public at Shot Show in Las Vegas. When I took to market the EP80 it was one of the most successful products to hit the market and stayed there until its demise in 2014. In 2014 my shop was raided as well as my house and personal life for that matter. I had to fight and spend ungodly amounts of money until late 2016 which is when I finally said no more. I realized that my attempts to fix what was started by a attorney would not go my way due to the government simply wanting me to go away and not willing to stop until I was either broke or behind bars. Well certainly neither of those was an option I was willing to take so I squashed the litigation.

Since then I had already released a new product, the EP80-2 and it was just as popular plus still going strong. So strong that many copycats have ran on the coat tails of a design that is the future of home weapons making. Now we have over 2 dozen products manufactured by E P Armory and have set up distributors nation wide as well as we have 2 manufacturing plants in SOCAL and East Texas. We plan to release a new caliber (224 Valkyrie) as well as a modified EP80-2 which we are calling the EP80-G. It takes glock magazines and is far below any other style of 80% lower on the market.

E P Armory is a family ran and veteran owned company. We strive to make the best as well as affordable products available in our market. Our lifetime warranty covers any and all manufacturing defects as well also offer a second chance policy on all of our products.

My family and my employees thank you for your continued patronage and we look forward to the day Sacramento drains the swamp with those slithery politicians in D.C. .

On the day that is supposed to be filled with nothing but love the USA was once again savagely served another shooting in a school which took the lives of 17 souls. A young man with whatever bat shit crazy thoughts decided that taking the lives of innocent people was the answer to his meaningless life.

Our country has been plagued with these types of incidents due to the inability of the judicial system, mental health authority, the ATF, the DOJ and the politicians who hold our hands behind our back. When the civilians have been disarmed the assailants have a free for all.

I would have been much happier to hear that this douchebag kid was gunned the fuck down rather than taken into custody.

A gunman set off fire alarms at a Florida high school Wednesday afternoon, luring hundreds of students out of their classrooms so he could open fire with a semi-automatic AR-15 assault rifle.

After firing several rounds, the shooting suspect, identified as 19-year-old Nikolas Cruz, dropped his weapon and hid among the crowd as authorities evacuated students and faculty members from Marjory Stoneman Douglas High School in Parkland, Florida.

Police captured Cruz over an hour later in Coral Springs, located about a mile away. He was taken to a local hospital and then released into police custody.

At least 17 people were killed and several others were wounded in the shooting, officials said. Cruz was charged Thursday with 17 counts of premeditated murder.

Below is a timeline of events that detail how the shooting unfolded.

"The suspect entered the east stairwell, that's building 12, with a rifle inside a black soft case," he said. "The suspect exited the stairwell [and] pulled the rifle out of the case."

Cruz, he revealed, "took the west stairwell to the second floor," where he shot one person in room 1234. The gunfire lasted a three-minute span, according to the sheriff.

Israel said Cruz "took the east stairwell to the third floor. He dropped his rifle and backpack [and] ran down the stairs."

Cruz eventually left the building with others who were trying to escape. He ran towards the tennis courts and then took a southbound turn, the sheriff said.

After the shooting, Cruz went to a Walmart and purchased a drink at a Subway before leaving the Walmart, according to Israel, though he couldn't give an exact time this occurred. Cruz then headed to a McDonald's and "sat down for a short period of time."

Students were allegedly texting about a shooter at the school.

Deputies responded to reports of a shooting at Stoneman Douglas High School, the Broward County Sheriff’s Office confirmed in a tweet.

WSVN, a local news station, reported that there were at least five people injured at the school.

The sheriff’s office warned the public to “avoid the area of Stoneman Douglas HS” as authorities investigated reports of an active shooter.

Cruz left McDonald's at exactly 3:01 p.m., according to Israel.

A student shared a photo to Twitter to show where he and other students were hiding.

The sheriff’s office tweeted the shooter was still at large.

Broward Schools said the school was on lockdown after students and faculty heard what sounded like gunfire.

“We are receiving reports of possible multiple injuries,” the school district tweeted. “Law enforcement and the District’s Special Investigative Unit are currently on site.”

A Coconut Creek police officer detained Cruz in Coral Springs, located about a mile away from the school, and he was "taken into custody without incident," Israel said.

President Trump tweets about the shooting, offering his “prayers and condolences.”

The shooter was taken into custody, the sheriff’s office confirmed in a tweet, warning that the scene was still active.

The sheriff’s office tweeted there were at least 14 “victims,” who “have been and continue to be transported to Broward Health Medical Center and Broward Health North hospital.”

The suspected shooter was taken to a local hospital.

Florida Sen. Bill Nelson said there were "a number of fatalities."

Israel confirmed the shooter was not a current student at Stoneman Douglas High School.

Students began to reunite with their parents.

Sheriff Israel said 17 people were killed in the shooting

A local news reporter for WSVN tweeted a photo of the suspect being detained by police.

“So many signs that the Florida shooter was mentally disturbed, even expelled from school for bad and erratic behavior. Neighbors and classmates knew he was a big problem,” Trump tweeted. “Must always report such instances to authorities, again and again!”

Cruz was charged with 17 counts of premeditated murder, Israel announced in a news conference.

Trump addressed the nation, describing the incident as a “scene of terrible violence, hatred, and evil."

He vowed to work with state and local leaders to help “secure our schools and tackle the difficult issue of mental health.”

Cruz appeared in court on 17 counts of murder. The judge ordered him to be held without bond.

Cruz confessed to arriving at the high school with an AR-15 rifle and a back pack of "additional loaded magazines" and told authorities he shot "students that he saw in the hallways and on school grounds," according to an arrest affidavit filed Thursday evening.
(0) Comments
Read More
Quick View